Velour became the fabric of a generation in the 1960s and 70s, as almost a rebellion against the fashion and societal constructs of the time. Being soft, comfortable and colourful, it was almost the polar opposite of the tailored, well put together clothing that was on trend for both women and men.

Despite not necessarily being one of the most fashion forward fabrics, velour still became so popular that it eventually made its way into mainstream fashion, especially after bands such as the Bee Gees were seen wearing it in the 70’s. The textile was embraced with open arms, with Adidas and other sportswear brands creating signature tracksuits and sports gear using the super soft material. Even in the 90’s, Jennifer Lopez’s first clothing line was pretty much entirely velour tracksuits with those signature flared legs – and that’s definitely one we’ll remember. 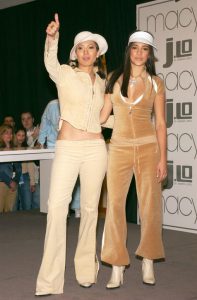