There’s a fair bit of speculation around where velour originated, but most seem to agree that it was first created somewhere in the Far East and travelled along the Silk route to Europe.

‘Velour’ is the French word for ‘velvet’.  Although not technically velour, pieces of velvet have been found in China which date back to old dynasties, as far back as 206 BCE. In 2000 BC Cairo was a production hub of velvet, alongside Iraq, creating the textile for royalty and the very wealthy. Originally velvet took such a long time to craft that it was incredibly expensive, making it a very high-end luxury good.

Mass manufacturing of velvet’s cheaper counterpart, velour, began back in the 1840’s with the production of cloth bolts. With increasing popularity, a variety of velour became available to the market, which unique finishes such as cotton, wool, ribbed and polyester.

Up until the 1970’s velour was primarily used for upholstery and household items, and only became popular in clothing in the late 60’s and 70’s – despite begin ridiculed for its background in furniture. 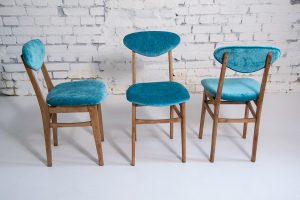 Previous: Velour In Fashion
Next: What Is Velour Made Of